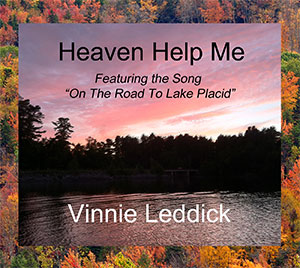 Click on the links below to sample tracks of Vinnie’s newest CD, “Heaven Help Me”.

This song came about the year my Son graduated from High school. We were having a conversation about what he wanted to do with his life and the many Paths to choose from and although we covered a lot of topics the underlying thought going through my head was that I had to let him go. To face his future on his own terms, knowing that his Mom and I had done the best we possibly could to prepare not just him but his younger Sister as well for the challenges they would encounter.Empty Space is a song that deals with the transition My Wife and I made from family life to “empty Nesters” One of the most emotional songs I’ve ever written, it only took fifteen minutes to write…VL

I’ve always been a numbers freak and this song shows the reciprocal nature of some of my writing and it’s a true story as is the case with most everything I write. I’ve often found it curious that It tends to rain on my Birthday and It certainly did that day. Coincidently if you want to know the date of the day I refer to in the song just find out what day the “Doobie Brothers” Played a SPAC (Saratoga Performing Arts Center)in the summer of ’81…VL

On the Road to Lake Placid (Sample)

One of the many places I perform happens to be a Resort in Lake Placid New York and after a few years of responding to questions like “Where are you from?” or “How long does it take you to get here?” I decided to write a song that explains my journey though I never thought it would become one of my most requested songs and one of my favorites…VL

Many years ago my Sister showed up to Thanksgiving Dinner with a Cassette Tape of John Mayer’s “Room For Squares” and insisted that I should learn some of his music because (in her words) “He’s 25 he’s awesome and he’s hot looking” I was not flattered by her lack of family loyalty…anyway, next day she gave me the tape and said “check it out and keep an open mind” I did. I had this idea of writing musical hate mail but it turned into a song of appreciation not just out of respect for John’s talent but his ability to inspire me to write another song…VL

Labor Day 2012 was the first day in more than two and a half months that I didn’t have to play somewhere and it was a great day to be on the water, although now it seems a bit selfish of me wanting to be alone the entire day and well into the evening, I new my Wife would understand as she always does. Floating in a Bay, no other boats around I picked up my guitar and the only thought in my head was “Heaven Help Me”…VL

I Know She Does (Sample)

Some people never want to let show how much they’re affected by personal tragedy or loss and so is the case with my Wife. This song deals with my desire to be there for her without pressing her to open up unless it was on her terms…VL

In Your Arms (Sample)

Exhilarating is how it felt to be “on the road” At the time this song was written the band I was in was headed from upstate New York to Florida on a two week mini tour. for me it was the first time I would be “away” from the daily routine of life in the Adirondacks in quite some time. The people and places along the way were a lot of fun but like the last verse in Bob Seger’s “Turn The Page” I found myself reaching for the phone cause I just couldn’t sleep, at least not without replacing the sound of the amplifiers with the sound of her voice…VL

I’ve often thought this song wasn’t as strong musically or lyrically as some of the others I’ve written but many of my Peers in this business have confessed that it’s one of their favorites if for no other reason than it conforms to the K.I.S.S. principle of song writing “Keep It Simple Stupid” and hey if Sting can sing “da do do do, da da da da” and make it work….why not…VL

It’s easy to see the right and the wrong with any relationship when you’re on the outside looking in, and such is the case with this song. relationships easily become emotionally bankrupt when the currency they need to thrive on in this case “Time, spent with each other” is thought to be squandered elsewhere. I watched a Band Mate and his Wife go through a “Crash Course” in marital discord unable to help and the song is just a reminder of priorities. This is also the only “Band” song on the Cd and I like to think it sets the stage for my next project…VL